So last post JR and I were "Mad." Not really we were more just slightly confused and befuddled.

The real anger happened this week when the condo association decided we needed a new roof.

Not just some new shingles, I'm talking a full blown REMOVAL of the roof, as in we could see the entire sky from the attic.

Not a big deal you're thinking, everyone has to get a roof redone every now and then, and you're right it would have been completely fine had the roofers not used the patio as their personal dumping ground. I have never seen such flippancy in regards to personal property.


I have also never seen roofers with such disdain for people and lack of decency than the ones doing this job. I've ALSO never seen such disasters when it comes to roofing a property, and I've watched boy scouts roof things. They actually used the trees, the stairwells, the attics, the patios, and the CARS of the home owners as their personal trash cans.

Then when they cleaned it up, they didn't actually clean it up... they left roofing nails the size of my pinky hanging out on the ground, they left shingle nails all through out my planters and they actually left full shingles in the planters. FULL FLICKING SHINGLES.


If I ever find out the name of the roofing company, I will write the most scathing of reviews on any review site that I can find, because when I asked if they were going to finish cleaning up the porch and told them that they were going to replace the plants that you see are completely destroyed, the manager's response was... "not my problem."


No. It is SO FLICKING your problem you little twit. Do you know how long it took to GROW those silly little green things? Do you think I can just hop down to the store and purchase more marigold seedlings? 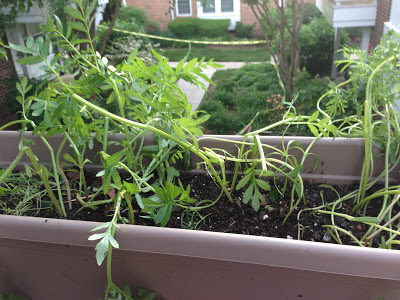 NO. I CAN'T, because people don't sell half-grown plants! They sell full grown flowers or seeds. I don't want full grown flowers, I want the experience and the pride that comes with growing a plant from a stupid little seed. AND it's too late in the season to replant them. So no. You're going to be paying me money for the plants, the water, the planters, and the soil you destroyed by flippantly tossing off (perfectly good) shingles (I have re-roofed things as well I know what a good shingle looks like) into our FLICKING garden. 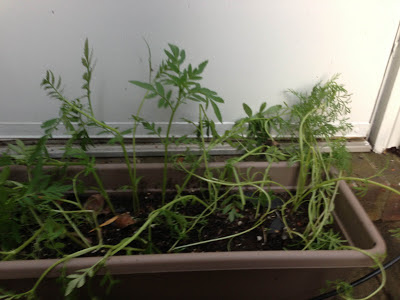 And now I can't even till the potting soil, because I don't know whether or not there's more nails in the pots. So I'm literally going to have to dump out all of the soil from every single pot and start over, because I don't do well with lock-jaw courtesy of the tetanus. 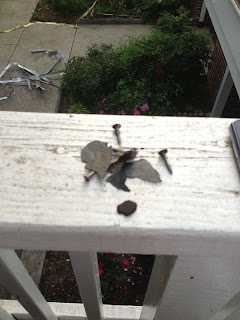 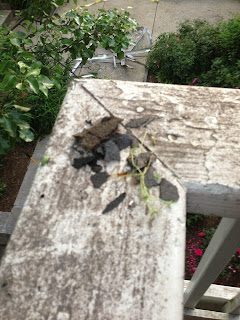 I pulled all of these nails out of one plant. ONE.

So let's see... not only am I down the amount of time and money spent nurturing those plants to adolescence, but I'm also out the money for filling every single one of those pots on the patio with soil. Also moving plants from one pot to another can shock the plant and cause it to die, so if any more plants kick the bucket, I'm out the cost of those plants as well... we're talking approximately $150 which might be pocket cash to some of y'all but to me, that's quite a bit of money, and I'm not happy about it.

On the upside... I think I want to plant Cubanelle peppers... or maybe some banana peppers... we'll talk about this later.
Posted by LoRo at 7:46 PM