The last two weeks have been -uh- interesting to say the least. The first thing of note is that I had my annual checkup with the doctor, and when I told her that I had made the dietary change to eating 30 different plants in a week, her literal response was...

"How are you finding them? Are you going out and foraging in the woods?"

And I cannot begin to tell you about the look of pure disgust on her face. I think she thought I'd turned to some new exciting diet fad. I could tell plain and simple I'd lost her there.

"If you're doing this for your gut health," she says. "You should just take a probiotic."

I disagree. And I disagree with good reason. I started this journey about six weeks ago, and I have actually noticed something quite fascinating in this process.

I've learned that if I go more than two days without drinking a smoothie, my stomach starts to act up. I'll leave what that means to your imagination, but I find this quite fascinating. Before I made the change, I was regularly taking omeprazole every day - every fucking day. And I know I mentioned this before, but since the switch, I haven't had to take it.

However in the last two weeks, I was less than diligent with my new diet, and after having an emotional breakdown in front of my doctor, I slipped back into old habits for one too many days... twice. And on day three of each round of missing smoothies, stomach troubles abounded. This new discovery means the world to me, because it shows me that my diet changes are doing something. They're helping my stomach. They're improving my gut health - probiotic or no probiotic.

She didn't even give me the chance to tell her about my kefir intake. PSSSSH.

This is fascinating because I did one of those 23andMe tests a while back and it said that I preferred salty food, but up till that point, I hadn't really noticed that being true. I was more likely to indulge in a chocolate chip cookie or some Smarties before I'd pick up some peanuts. But I think my sweet tolerance is hitting the roof, because all I'm ever craving are chips and cheese and peanuts and salt. SALT SALT SALT. Probably means I'm missing salt in my diet, and that is something I shall mention to the dietician...

Oh yeah... my doctor wants me to talk to a dietician.

Because seeing me for 3 years, she's only really concerned about my weight now that I've told her I'm foraging for plants in the aisles of Whole Foods.

Anyway on to the recipes!

First, I have to admit though... I fell off the wagon, and when I did I didn't drink/make as many smoothies as I normally have. But that's okay because I still made it to 30 plants each week. But only just last week. 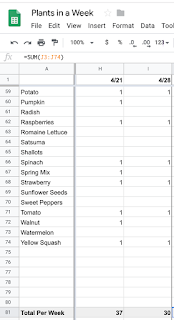 I'm already doing better this week, but because of that little falling off the wagon, I don't have as many good/bad recipes.

The Sunrise is a great start to a day, it's bright and toasty and has enough oomph to get your day going on a positive note. And as I noted with the break down in front of my doctor. I needed some positivity over the last few weeks. I definitely recommend this one.


The Cauli-what!? is the first cauliflower recipe that I made where I couldn't taste the cauliflower. It was such a success... that I actually just forgot that I even had cauliflower in my freezer, and I haven't tried it again. Haha!

And the last tasty recipe I have for you is The Cobbler. This tastes to me how the name suggests. It tastes like a cobbler. I'm not sure what kind of cobbler, but you can try it and let me know what you think.

And then there was the bad. What I've learned from this bad recipe is that strawberries can't overpower everything and unsweetened Elmhurst Cashew Milk isn't something I'll repurchase. The Upchuck City was so rough that I couldn't chug it. Nope. I had to take a sip every 10 minutes to get this down, because chugging would have meant puking. So I do NOT recommend this. I recommend avoiding it like the plague. And I know what you're thinking. You're looking at this and thinking... noooooo that can't be that bad. It was. BLECH BLECH BLECH. It was insanely insanely bitter. Do not recommend.