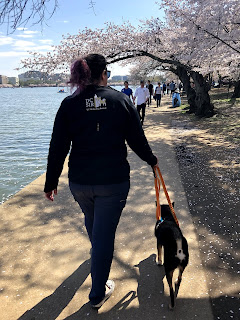 Today was absolutely gorgeous. For a day that was supposed to be completely overcast, mother nature had the last laugh and the sun peeked out and gave us a gorgeous blue sky, and what do you do with a gorgeous DC Metro day in early April?

Cherry blossoms. Yep, that's correct. You pull on your tourist shoes and pack up one of the dogs and take them on a walk around the tidal basin.

Lady has had the last couple of solo outings to a beach when we were down in Florida. So it was Nymeria's turn. And what a turn it was. Nym absolutely loves to meet people and she met quite a few today and allowed them to bask in her glory. And with a jaunty smile on her face, she was looking quite pettable. And she allowed a few of them to give her pets under her chin and on her back.

Two weeks into my 30 plants a week challenge and so far so good. I thought this past week would beat me, but some last minute Tex-Mex saved the week! Never underestimate the powers of guacamole and pinto beans.  😂 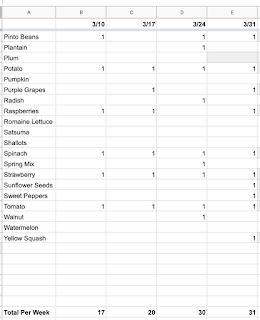 I've also realized as part of this challenge, that I can share my best of the best smoothie concoctions with you so that you anyone else looking for some tasty recipes packed with plants can reap the benefits of my trials and learn from the mistakes I made.

Here are the top 3 smoothie recipes for the past two weeks! Oh! And unless noted assume all of the veggies/fruits are frozen.

This first smoothie recipe is in the works, but still pretty delectable as is. It was my first go at trying Aronia Berries (aka Chokeberries). I wanted to start small because with a name like Chokeberries I was a bit apprehensive. But there were no issues and it was absolutely delicious. The bit that's in the works on it in particular is I'm wondering what it would taste like with coffee or green tea instead of the cashew milk and maybe a teaspoon of cocoa powder or cocoa nibs. I'll more than likely try that down the road, but this is a good start.

For this next smoothie, the main goal was to get in yellow squash and start trialing other liquids aside from kefir. And it was a smashing success. This is a very filling smoothie that is definitely a meal replacement. With the other smoothies I've made so far, I've been eating carrots, nuts, grapes, cheese or the like on the side to really round out what I'm eating. But Feeling Full is a great option for something to blend together before you head out the door for work. As for the flavor, it leans more into the sweet, robust, and nutty profile. It would be a great starter smoothie for someone trying to add in a variety of plants into your diet because it has nuts, veggies, and fruits.

And for the final recipe, this was the smoothie recipe that I started with. The first recipe that I pulled together over a year ago to start to sneak greens into my diet. I knew I liked the berries mixed together and that they would provide a pretty sweet flavor to mask veggies. It's also one of the easiest to source, because all of the plants are readily available in the frozen foods section. The important part of this recipe that might be hard to find is the Elmhurst Milked Cashews. This specific cashew milk is important in this starter recipe because they have more cashews per ounce in their milk than others. So the flavor of the cashew milk helps to mask the spinach further. You can pick another one, but if it's the first time you're trying to trick yourself into eating spinach. I recommend this specific brand.

As for the mistakes I made in my smoothie preparation for the last two weeks...

Well, the first one I would like to point out is that cranberries need to be balanced with sweeter than usual fruits. At least the most recent bag of cranberries I got did. I've used cranberries before in smoothies, but something about this mixture was off. I don't know if it was because I wasn't using Elmhurst Milked Cashews or what, but this recipe below was so tart, I felt like my face was going to be frozen into a pucker. That said. The overall flavor wasn't bad. It was just way too friggin' tart for casual drinking. Would probably be great if you’re looking for something to kick in the ol’ saliva glands/lymph nodes around the neck. Here's the recipe.

And the other mistake I made was using roasted seeds instead of raw seeds. I picked up a container of Planter's roasted sunflower kernels for something new this past week, because I used to love gnawing on sunflower seeds back when I used to play softball, and I thought it would be a great way to add in a new plant. And it would have been great except for the fact that I didn't think about the roasted flavor profile with the sweetness of all the fruits. This smoothie was so bad that I couldn't finish it and actual threw half of it away. However, I've learned my lesson and will get som raw sunflower kernels to try next time.