Hoppy Easter my good friends. This past weekend started off with nasty weather, but it managed to keep the tornados off the condo. Thank goodness. Tried taking Lady to see the cherry blossoms by myself after my last post, but they had completely disappeared. Absolutely heartbreaking. I also discovered that there is an actual high tide at the Tidal Basin, which was news to me. I knew it was called the Tidal Basin, but I didn't know that at high tide the water covered the 5-foot sidewalk and blocked off paths around the walk. Alas. Instead of a nice jaunt, Lady got to people watch and smell all the dead blooms. 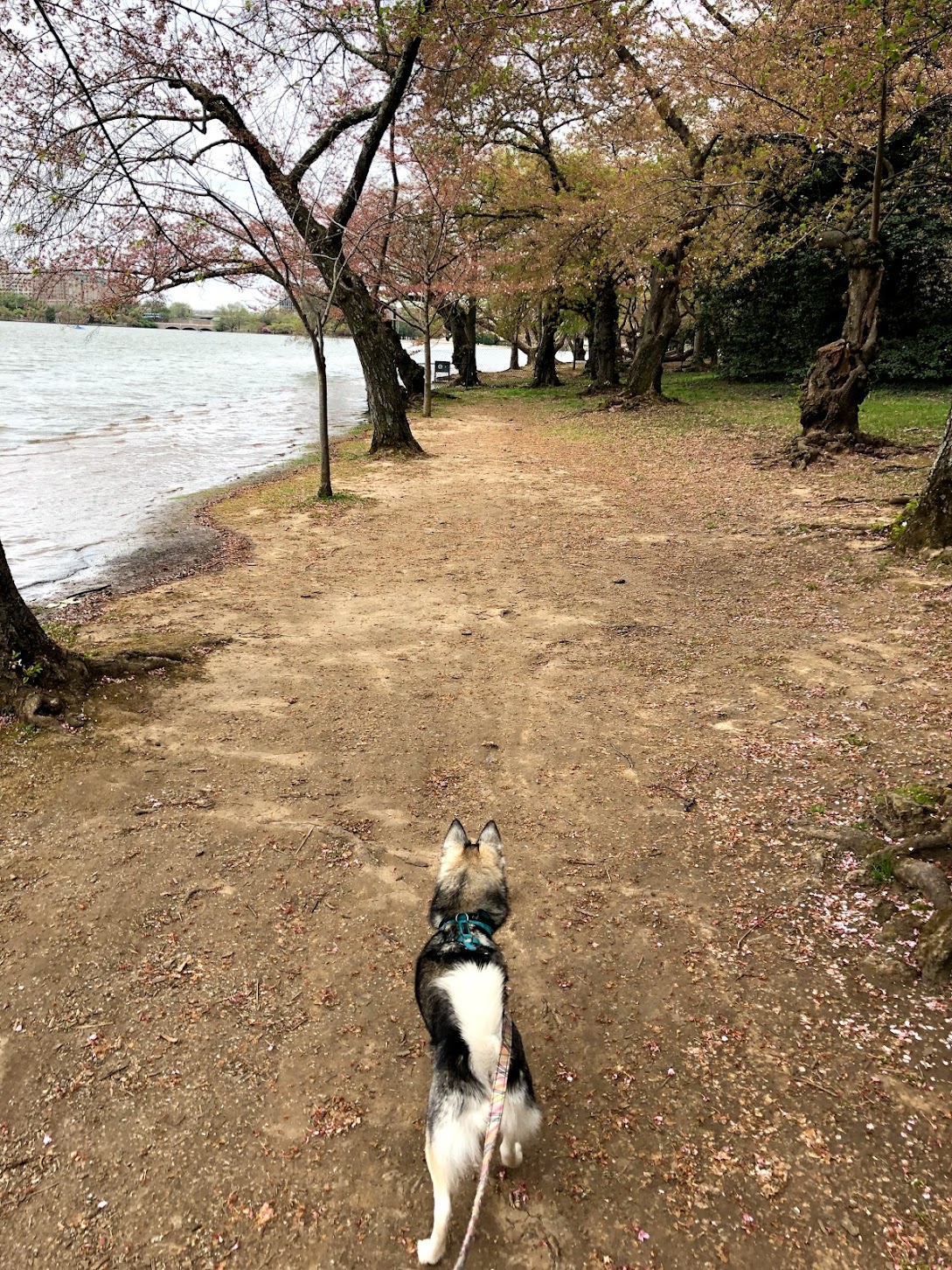 My success these past two weeks was absolutely smashing. I ate 41 different plants on the week of the 7th and 39 this past week. High-five to me. Yes, I just gave myself a high-five. Deal with it. And I have a fun little side effect to note. I have not had any sort of acid reflux or excess stomach problems since I crossed the 30 plants-in-a-week mark. As someone who has been treated for gastroenteritis for three years now, I have been able to get off my pill and have no ill effects. I'm impressed.

Another part of the challenge that I've saddled myself with is trying foods I might not have really gravitated to all that much before in attempts to shove more things into my smoothies. This past fortnight I finished the plum and nectarine from the period prior and added in cauliflower, which I am having some trouble figuring out how to mask. It also included the addition of butternut squash, an opal apple, dried golden and mulberries, flax seeds, and raw sunflower kernels. This coming period, I've collected some pears. I don't like pears, but we shall try them because I like them more than bananas, which have no place in my concoctions.

So without further ado, here are the top 3 recipes for the past two weeks.

The Absolute Number ONE best smoothie I've made so far is the "Pink Dream." I will admit with full honesty. It looks like Pepto Bismol. But the taste is anything but. It is a smooth, sweet beverage that tastes super fruity and bright, and was exactly what I needed after a day of feeling like my actual head was spinning. I could not taste one hint of veggie, but it contained three different kinds. I'm almost on the tail end of my last batch of yellow squash I froze up, but I bought more just to make this drink again. 10 out of 10 - HIGHLY recommend giving it a try.

As the week went on, and the weather started to warm up, I really clung to this idea of "lemonaid" smoothies. I still haven't perfected that, but I did start adding in lemon to bring a more palatable tart flavor that didn't involve the bitterness of the current bag of frozen cranberries I have. So I created the Raspberry Delight. It reminded me a bit of the bright and fruitiness of a Sunny-D, hence the name. Now granted it doesn't taste like Sunny-D, but it does taste a bit like summer in a glass. I would probably play around with this recipe a bit more. Maybe increase the lemon count, and eliminate the blueberries to really focus on the Raspberry flavor, but it was quite tasty.

And the final top 3 smoothie is A Pick Me Up. This one I made for lunch one day, and I had already had a kefir/cashew milk based smoothie that morning. So I wanted to switch it up and maybe cut out the 97.5 calories that always comes with the cashew milk. The result was another drink that was bright, fruity and lip-smacking tasty. It was a bit more tropical with the dragon fruit and coconut than the Raspberry delight, but it was still sweet and tart and provided an excellent dose of plant goodness (blech, I vommed in my mouth typing that. I don't know who I'm becoming, but I plan on impressing the pants off the doctor at my annual checkup.

And now for the mistakes. I'm going to put a LOT of the failed drinks that happened this week squarely on the shoulders of the honeydew melon, cauliflower, a mistaken wish to deplete my cupboard of fruits I bought a while back for the hurricane threat we had here last summer, and that damned opal apple. I don't care if you never get brown opal. You lack enough robust flavor to cover things up!

Before I get into the two recipes, I want to mention that I can just about chug anything that doesn't taste particularly appetizing if I do it in one go like a frat bro in a drinking contest, but just like last week, I had one smoothie I could not finish.

The first one is "Dear God No." I do NOT like the standard Cavendish banana that you can find at most grocery stores. I have sampled other bananas through Miami Fruit (recommend getting a banana sampler box), but overwhelmingly I only like maybe one or two of the bananas that I have tried. It is not my fruit. It makes me gag. I wonder if in a previous life if I was stranded on a deserted island with only bananas to eat. Anywho, now that you know this tidbit. I can tell you why I did not like the Dear God No, because for some unknown-to-me reason, this smoothie tasted like fucking bananas. I don't know why or how. No banana was included in its creation, but somehow it did and it was horrible. I chugged it down as fast as I absolutely could, and managed to not expel it into a toilet, but mysteriously something else in here made my lips PHYSICALLY VIBRATE. At first, they felt tingly, but then they started to vibrate and hum. I strongly suspect something in this smoothie is something that I am allergic to. I am pointing out that it could be the cup of fruit that I had from the hurricane scare last summer, the dried goldenberries, or that damn opal apple. Either way. I would not make this specific smoothie ever again.

The next horrible smoothie was the "Nope Nope Nope." I have nothing to say about this other than it was bitter, savage, and gross. I suspect a few of the milder flavored ingredients did not mask the flavor of the jackfruit bulb and the spinach. I'm looking at you honeydew! And you too you stupid opal apple! I drank half of it and could not stomach another single drop. Was not even chuggable. I do not recommend. What I do recommend is not using honeydew in smoothies, but here I am with an entire frozen honeydew chopped and frozen in the fridge. I shall try to find a way to make it work. Or, I shall thaw and eat separately. I like honeydew. I just don't think it's a hearty enough fruit to mask nasty flavors in smoothies.