Wow - it's hard to believe that Nymeria has only been at home with us for a week. Seems like she's been here forever. We picked her up from Blue Ridge Shibas last Saturday and started the lengthy drive home. At first she wasn't too sure of the car, but then as we took some time at the first rest stop, she really started to get not excited, but happy. She seemed, happy.

The first two nights were rough. She very clearly missed her siblings, and we'd spend hours petting her to help her go to sleep, but as soon as you stopped, she started up again. I wound up spending the second half of the first night on the couch, sleeping with her on my stomach.

So far we've learned a couple of things. The Kong Halter, was a huge bust. While it fit properly, it kept rotating around her body and confused her. And the underbody mesh piece kept attacking her face. I don't know about you, but I personally do not approve of things attacking faces... So while it looked good, it wasn't very usable. I don't recommend it at all. 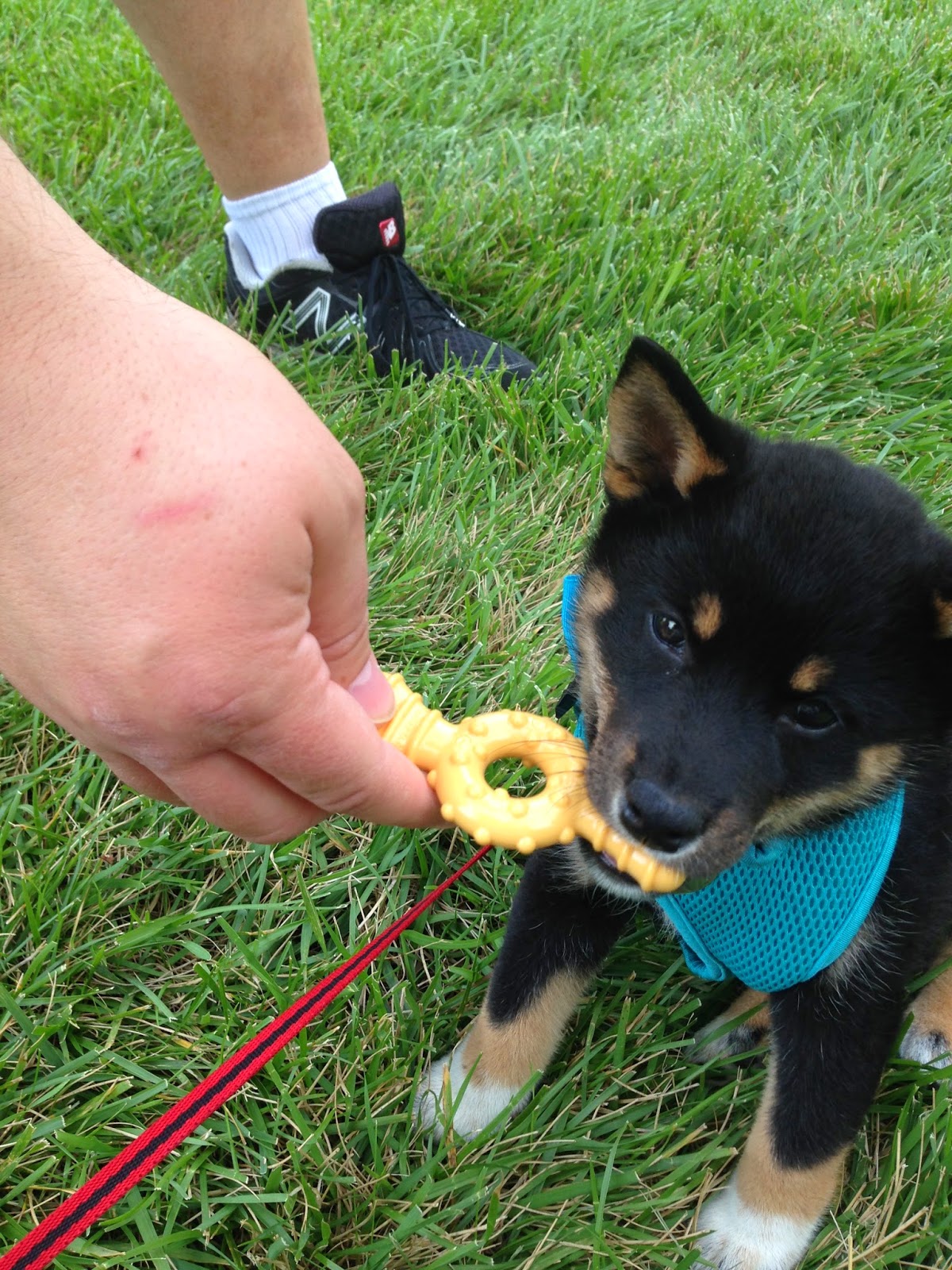 So we moved over to a mesh style halter - just your standard Petco/Petsmart mesh halter in her signature, teal/turquoise color. For the first few days this was perfect. She was still uncertain of other people and dogs so she'd stay pretty close, but over the last two days it's become very apparent that she's gonna be a puller.

We decided after a couple days of watching her freak out when the stretch lease stopped and after more than a few, 'oh, I am so not walking that way, I want to walk this way' experiences that we needed to move towards a halter (at least while training) that is front guided. So after our petco halter proved the wrong size, I did a bit of research and bought a SENSE-ation, and it should be here on Wednesday. I forsee tug-of-wars in our future.


She's definitely starting to come out of her shell more, and she's quite the awesome pup. Aside from her new-found dislike of her puppy kibble: she loves people, she loves other dogs, she's everything a puppy should be, including certifiably adorable - The Daily Puppy said so, and she's definitely a great fit for JR and my lifestyle.

Overall she's settling in nicely. We've met some toddlers and babies and lots of people, but by far her favorite thing she did this week was the puppy party over at WOOFS! She got to have some off-leash fun with other puppies in her age/size group and made some great friends. She was completely not having us put her in the car to go there originally, but after it was over - she didn't want to leave. We're gonna enroll her in puppy kindergarden so that she gets more off-leash play time and some basic obedience training. She's gonna love it. We think. We hope...