You always get the extra insurance...

We arrived on a Monday in Glasgow and picked up our rental car and the insurance with all the bells and whistles and headed immediately north on the A87 to Fort William. Our travel agent had us staying at the Inverlochy Castle Hotel, a 2 1/2 hour drive from the airport. We had decided to forgo Glasgow for our honeymoon to see more of the countryside - and boy was this the right decision.


It was JR and my first trip to Scotland, and my first trip across the Atlantic. I thought flying to Puerto Rico took a while.... but clearly I had no idea. Our honeymoon started as all should near Loch Lomond... I'd never seen such a beautiful place - the rolling green hills, the still water caressing the banks, and a sky so blue it was of sapphires.

But it didn't take long for me to realize that while the loch was gorgeous - the drive was a nightmare.

I think the Scottish definition of highway needs to be rethought, because A87 is no highway. It was a cowpath with two lanes of traffic going in opposite direction at 60 mph with only a spotty white line betwixt ya and a solid brick wall on your left and a sheer drop into the loch on your right. I've always been a nervous passenger in cars, but this was a lesson in horror. The road winds back and forth and up and down akin to a drunken camel stumbling in the dunes of the Sahara. But where that's pure open sky, this was a wooded journey into blind faith that the person in the other lane around the corner was actually staying in their lane.

You know - they normally weren't.

And maybe Scotsmen are made of sterner stuff, but as a Scotsman myself - I screamed and shrieked like a little girl. I'm pretty sure JR was going to kill me. "AH the wall! AH the car! Ah the fuck - was that a fucking 18-wheeler?" Let's just say the first fight in our marriage was about the 5 inches between us and the brick wall to the left of our car as we sat waiting for a construction stop light in the middle of a Scottish highway.

It was probably fortuitous that I was the one complaining about those 5 inches...

Our honeymoon was basically the great-Scottish roadtrip, complete with castles, beautiful purple moors, and sheep... in the actual road - like a frickin movie. 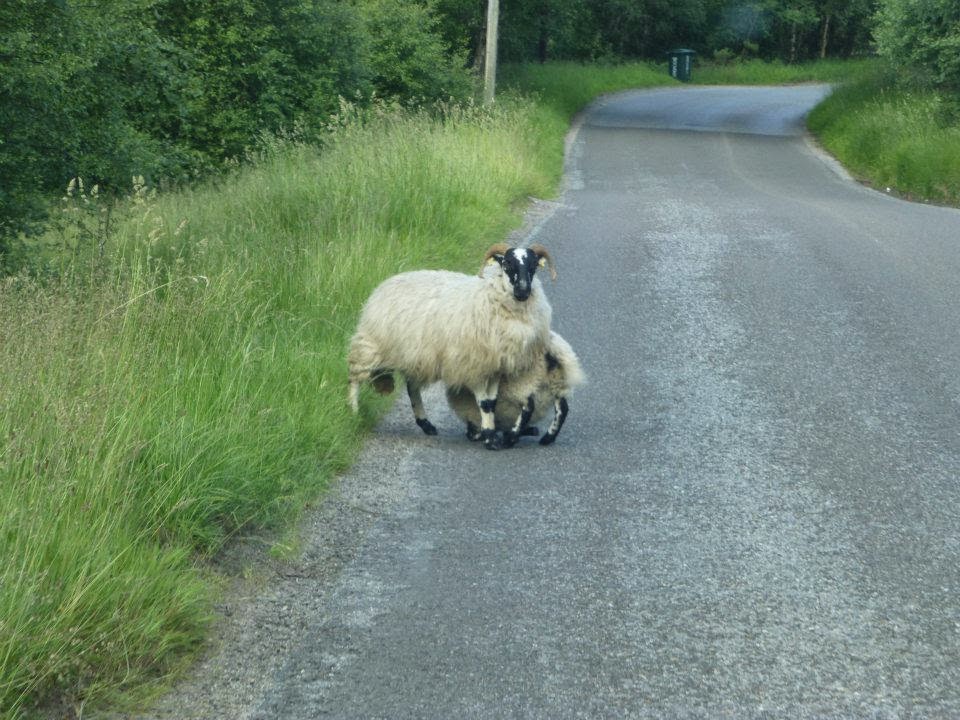 Between JR's inability to cope with the copious amounts of complaining I spurted on our first day of driving and his general distaste for learning to drive on the wrong side of the road... I did the majority of the driving for the rest of the trip... and I loved it.

There is something exuberating in doing something wrong. And driving on the wrong side of the road at 60 mph (okay.... 80 mph) on the narrow roads round curves and bends was like a shot of adrenaline to my soul. I've always loved driving, but driving in Scotland was like driving in heaven. They say heaven has streets of gold... well I hypothesize those streets are crooked and tiny, cutting through grass covered mountains with an ambiguous speed limit.

As you can imagine from my blossoming enthusiasm... it was only a matter of time before my desire for the open roads was curbed by slow moving cars and 18-wheelers (which the Scots so cheerily call lorries). In Scotland though this shouldn't have been a problem, because they have posted signs every 10 miles that say, please pull over in the laybys and allow for passing.

Most cars abided by the rules, but those frickin lorries and their ignorance of the stacking traffic behind them never pulled over. It was a miracle if one even pulled over on the A9 (one of the few roads with more than one lane going in either direction) in the slow lane of traffic.

I've never been the patient sort - so on day three, en route to Urquhart Castle on the banks of the Loch Ness, we'd been stacked in backed of traffic for every construction crew, slow cyclist, and janky draw-bridge for nearly an hour and a half, and I was up to my eyeballs in screw this.

As we jolted up to speed after a particularly grueling wait for a road-crew re-affixing metal mesh to the side of a particularly jagged cliff face, I couldn't stand it any more. The lorrie in front with his slow moving ways (seriously 40mph in a 60?!) was driving me wild. Loch Ness was so close and a bathroom was my promised reward. I could just see the oddly flushing Scottish toilet in my mind's eye and racks of kitschy Scottish souvenirs in my future. If only this truck would... just... go... a... little... bit...  aw screw it.

I looked around him, and seeing no one I pressed the gas hard on the 2014 E-Class Mercedes with only 200 miles on it. I could feel the engine rev and the whoosh of air from the window. The wind whipped my still shower-damp hair, and the peaceful sound of the countryside begged for me to join it. Oh the Scottish roads! Ah Loch Ness! You sweet highland air fragrant with the sweet tinge of <CRACK>
OH SWEET MOTHER OF THE LORD, OUR EVER LOVING MIGHTY

And with that... the side mirror detached.

I'd like to say I held some sort of dignified air as I pulled into Urquhart Castle - side mirror dangling from two of the thinnest, dinkiest wires on the side of the brand new Merc.

It was the German tourists that appeared nary a second after I pulled into a parking spot that cracked me. Their cheerful demeanor as they said, "Oh Wow, yah! That was a doozy. We saw it from behind!"

Yeah... you lost the last two World Wars - my one broken side mirror is nothing! Screw you!

So my recommendation for you my good readers? When you visit the UK and drive on the wrong side of the road... You always get the extra insurance.

That extra 10 pounds a day was nothing to the repair bill - let me tell you. Those extra pounds were well worth it to know we didn't have to pay for a new side mirror.
Posted by LoRo at 9:51 PM