Peeking at a Peck of Unpicked, Unpickled Peppers - Garden Post 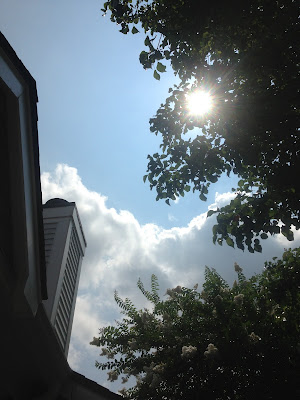 So as last you heard, spider mites were tenaciously taking over JR's and my garden. They had latched onto all of the marigolds and essentially made it their cesspool of a house. Having NO idea what was happening, we had left them there for a while, thinking well... it's spiders, just hanging out building a web, but NOOOOOOO. Effing little spider mites surreptitiously took over my favorite flowers.

So into trash bags they went... then a week later, I noticed the stupid little flecks of vermin crawling on our basil and pineapple sage plants.

Be gone with you! Into a trash bag.

After that I started sniffing out any trace of the red devils I could find, and I found some on our Serrano pepper plant, but you know what else I found on our Serrano? A PEPPER! I FOUND A PEPPER! There was actually a single beautiful Serrano clinging for dear life to the plant. So since we had a beautiful few days this weekend, back out into the garden I climbed, eager to prune and feed all of our little plant-ies!

So FIRST! I put my new beautiful cover onto our Chaise Lounge, because seriously... Never knew how disgusting they got without a cover... and this cover is absolutely perfect, because I can take a shower, throw on a dress and let my hair dry Au'naturale via the gorgeous sunlight. And this cover was made 100% better by the fact it was on clearance at Target! Love Target - Love Clearances! 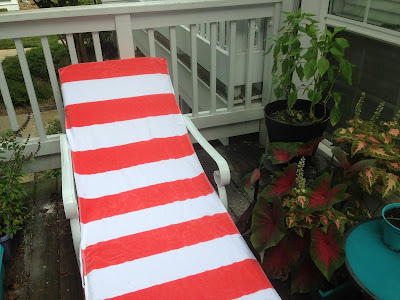 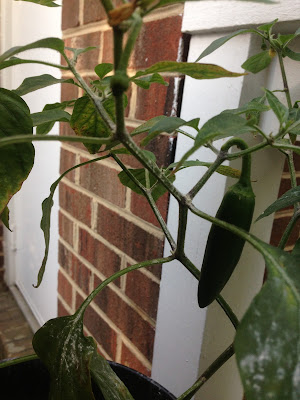 So now that the furniture was looking good, I watered our plants with some high quality plant food included. Gotta feed those peppers! Here's our Serrano as I first saw it. It's absolutely gorgeous. It was about an inch in this picture, and you can also notice another pepper forming in the upper left hand of the photo.

We've been leaving it to get a bit bigger and as I write this it's now about two inches... yes I've been naughty and haven't written about it in a few weeks, but I wanted to save it for the really exciting news...

Not only is our Serrano kicking ass, growing some tasty peppers, but our CUBANELLE and Banana Peppers are too!!!! The Anaheim is taking it's time, so I've started calling it the Anatime sucker. Soon (aka like 2 months) we'll have beautiful Cubanelles grown straight from our own (HIGHLY pesticided garden)... so... yeah... really concerned about eating them. THEN, I sprayed the ever-loving-hell out of every single plant with a heavy dose of organic pesticide, because, they all needed it.

Why so in love with all this pesticide-y-ness, do you ask? Well first there was the "fungus," then the clear maggots, THEN spider mites, THEN aphids, THEN whatever pest is on it's way next, because serrrrriously, there's probably a swarm of killer bees coming our way carrying a flock of some bugs I dont even know about yet. Why killer bees you ask? Because they'd block me from going outside to poison the other bugs...

Because why would you even walk outside for a second if there were killer bees on your front porch? Me... I'd call animal control.

But back to the peppers... As you can see in my lovely photos (blurred ever so slightly by my phone case covering the lens... because it's waterproof, because you only drop your phone in a toilet twice, before you realize  it's time to protect your electronics).


Our Cubanelle is a little behind the rest, but it's actually really exciting to watch the peppers form from the decaying flower buds. Seriously... if all flowers turned into tasty food stuffs, I would hoard flowers like you wouldn't believe... I'd be growing a veritable menagerie of flower-food. But since only a few do, I'll stick to the peppers!


So that's it for this exciting edition of what LoRo kills (hopefully not the pepper plants - though the anatime sucker does look like it has the ugly little flecks that appeared before the spider mites built their web - so we'll see).

We are having some success with some of our other plants that are KILLING it! Seriously! We'll keep you posted!

Stay tuned every Monday and Thursday for more posts!