Painting Addiction - I want ALL of the Sotskova's

From a young age, I devoured literature. I ran through the library at my middle school grabbing books like, "For Whom the Bell Tolls," "Jane Eyre," and "The House of the Seven Gables," as a sixth grader. By the time I got to high school and had to read "Jane Eyre" for AP Literature, I'd already read it, at least 50 times. I loved the words that Bronte had put on the page, how they flowed, how they ebbed, how they wound a web of pure lyricism and waxing hope.

I thoroughly disapproved when my literature teacher tried to demand I break Bronte's beauty into harsh realities and find meaning in every place, person, and thing. I wanted to scream, "YOU'RE MISSING THE POINT!" You're missing the delicacy of Charlotte's descriptions, for example, after Jane Eyre has just encountered Mr. Rochester for the first time, in the darkening moor, Bronte writes, "The new face, too, was like a new picture introduced to the gallery of memory; and it was dissimilar to all the others hanging there: firstly because it was dark, strong, and stern. I had it still before me when I entered Hay,..."

The simplistic beauty of what she has written, lets the reader know (without having ever read the cliff notes) that this man is THE man for Jane. But did we cover that? NO! We butchered and hacked through the novel based on AP guidelines. Unfortunate.

But back to the point.

A year ago, I encountered an artist's work who was new to me. Lena Sotskova. I was on a cruise with my family, and it was the first time I'd seen an art auction on a boat since Park West did the nasty with client's cash. So I was curious to see how it was run, when I saw this painting:
I thought, how intriguing, I love the movement from light to dark, it's almost as if a battle is being fought for her soul. Who knows if that's what's happening, but that's what I felt. I thought, beautiful. 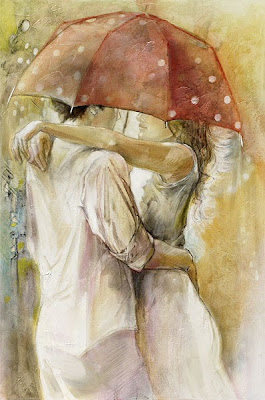 I fell in love. I loved the hinting, Sotskova worked into her paintings. Just enough to insinuate. Just enough for the viewer to know what's coming next. I was hooked.

I pretty much spent the next week, drooling over Sotskova paintings, that I almost completely overlooked one of my favorite painter's of all time's protegee's work.

We'll talk of them another time, the point of this post is - I'm addicted to Lena Sotskova's work. The lighting, the mood, the strokes. I feel like I'm looking at a modern, female's take on Vermeer, and while I may never own an original Vermeer. I definitely want to own an original Sotskova. 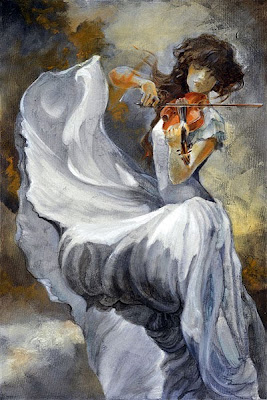